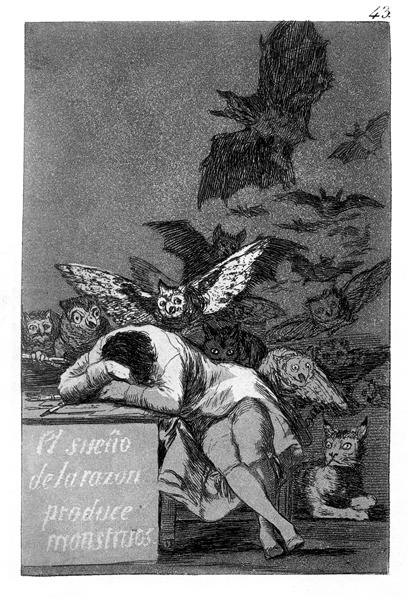 There is no doubt that healthy-mindedness is inadequate as a philosophical doctrine, because the evil facts which it positively refuses to account for are a genuine portion of reality; and they may after all be the best key to life’s significance, and possibly the only openers of our eyes to the deepest levels of truth. ― William James

The Sleep of Reason Produces Monsters is a phantasmal etching produced in 1799 by the Spanish painter Francisco Goya that depicts the imagined artist slumped over his desk, in a posture of nihilistic defeat, as ominous owls of madness and shadowy bats fly erratically overhead. This was Goya’s artistic commentary on Spanish society that he interpreted as succumbing to a lunatic’s brew of unmitigated fear, social antipathy, unrivaled corruption, and the liabilities of political unreason. The haunting image would persist as a representation of chaos whenever, as the poet W. H. Auden reminded us, the values of the enlightenment are driven away.

A little over two centuries later, in America’s post-fact zeitgeist of partisan sensationalism and multimedia gossip, the emergence of a toxic brand of emotionally volatile, identity-imbued populism threatens to destabilize society by appealing to authoritarian panaceas in the wake of geopolitical uncertainties. Relinquishing the faculties of reason, objectivity, dignity, and civil ethics when offered specious solutions for security or prosperity is as irresponsible as it is pernicious. After all, “total solutions” of Manichean simplicity are never realistic or sustainable in a world of increasing complexity and irreversible diversity. Just as Freud exposed the mind’s obsessive desire for a paternal caregiver during periods of crisis or vulnerability, we witness other parallels of uncritical yearning when people seek the mana-personality from Jung’s description of the collective unconscious. To mistake narcissism for competence is to mistake stentorian bravado for guidance. Likewise, to assume that personal significance or the assurance of safety can only be achieved through divisiveness is to perpetually recreate the very atmosphere of tyranny that one wishes to escape.

It appears that a grave deficit of cognition exists in the populace’s mind that prefers herd instinct to the arduous pursuits of objective analysis, social justice, moral philosophy, civil discourse, and scientific literacy. This belligerent lack of compassion, crude mockery of applied intellect, degradation of scientific methodology, and a selfish unwillingness to concede heterogeneity among communities has resulted in an abeyance of decency under the guise of exceptionalism.

Ideologies replete with paranoia, conspiracy, and mistrust were central to the atrocities of the twentieth century when varieties of fascism compensated for national insecurity. Balkanization was both anthropological and geographic in nature. As a result, mass trepidation created an isolationist vacuum for opportunistic absolutists to emerge. And their insatiable need for adulation would come at the endangerment of civilization.

As Thomas Hardy recognized, “If a way to the better there be, it lies in taking a full look at the worst.” Indeed. The evolved predicament of our human condition demands an identification of suffering; vigilant protection of social liberties; the maintenance of empathy; and an intrepid guard against the dangers of despotism if there’s any hope of achieving the means to an auspicious end. Otherwise, there will be no monster left behind.